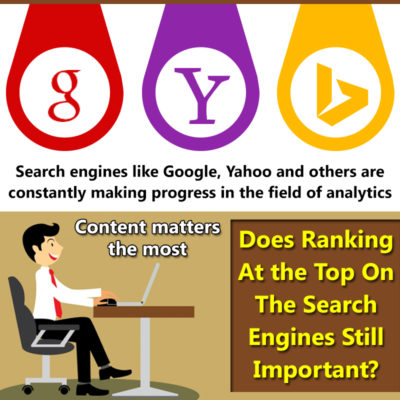 SEO refers to a collective set of activities that are inclined towards increasing rankings for a particular keyword or niche. Ranking at the top on the major search engines can help a business or a website to drive traffic to their websites and hence reach a large base of targeted audience.

Statistics indicate that a website ranking at the top receives 32.5% of search engine traffic, while the second and third position receives 17.6% and 11.4% respectively. Assuming that there is equal search traffic for every page, the first position on one page is equivalent to second positions on two pages and third positions on three pages. Thus, a website which ranks second can climb to the 1st position on a page as they can afford to let go of their second position. However, there has been a change in such views about SEO and at present they may not be as important as they were deemed before.
Following are some reasons why rankings may be losing their importance:

• Advancements: Search engines like Google, Yahoo and others are constantly making progress in the field of analytics. They devise new ways to filter websites that post information on their pages ensuring that readers get nothing less than valid and authentic answers for their queries. Apart from ranking, Google also has a knowledge graph box that shows three websites answering a query in the most efficient manner. This may influence the readers to view these websites rather than blindly following the top ranking sites. It might reduce

• Difficulty in finding keywords: Earlier, integrating most searched keywords or phrases were enough to generate traffic. Once a site achieved a certain rank, they could remain in the same position for a considerable time. However, with progress in semantic search, search engines no longer judge websites on the basis of the exact integration of the keywords or phrases in the content but on the basis of its relevance.

• Content: Web developers and writers have realized that it is the content that matters the most with regard to optimization. If the content is written in a way that is easy to understand for the readers and is elaborate as well, leading to many links it will receive greater traffic. Moreover, content that is written in great details already has keywords and phrases that were used unintentionally. Hence, good content will always get precedence over forcible optimization.

• Click through rates (CTR): The CTR is generally higher among top ranking sites. However, a site that is designed in a way that is meant to receive higher number of clicks by its users may become popular, irrespective of its position. This requires optimization of the site and appeal of the metadata to the users.

• Time spent by the user: Ranking at the top or having great traffic either of these will hold value only if the user spends some time on the website. If majority of the incoming visitors end up bouncing before taking any meaningful action on the website, their presence would hardly matter. Even ranking for all the major keywords related to your website won’t be of any use in such a scenario. Hence, adding value to the content by allocating resources for achieving a balance between both value and quantity should be the key focus area.

However, the above points in no indicate that ranking at the top has no relevance today. It is still one of the most essential means to drive traffic but the concept of SEO has changed drastically over the years. There are more elements that contribute towards popularity of a business of a website now.

Local SEO Jacksonville Company offers advanced SEO facilities to clients from across the world. They can be reached by calling on 9044259679 or filling out the contact form at https://www.localseojacksonville.biz.