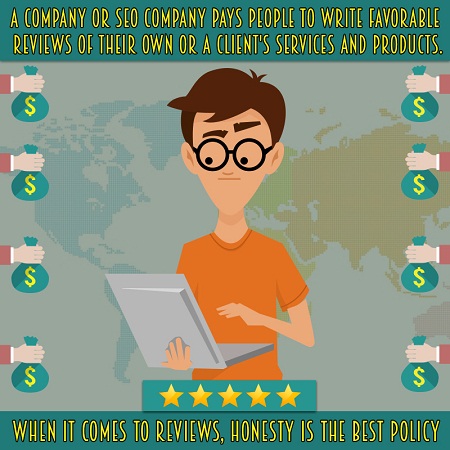 One of the oldest scams on the books are companies that post fake reviews of a company’s products or services. What many don’t realize is that there are severe dangers for doing this and it’s on the horizon that you’re looking at certain doom if you engage in such practices.

The problem is that unscrupulous companies and web-based companies have been engaging in this practice for years without penalty. Well, those good old days are gone and it’s only a matter of time before the hammer falls with a resounding BOOM!

With increasing effectiveness, the search engines and courts are catching and punishing this form of deception. It’s tough to detect and takes lots of caution so as not to cause injury to an honest site owner, but it’s being done in waves.

The Way It Works

The way fake reviews works is, a company or SEO company pays people to write favorable reviews of their own or a client’s services and products. These reviews are seen by both public and search engines as positive and worthy of upward business and search engine position. The same companies and individuals post fake negative reviews on their competitor’s sites hoping to bring them down. It’s dirty and dishonest and serves no good to one and all.

Some customers of SEO companies don’t realize that the SEO company is actually doing this and they end up surprised when their sites get banned by the search engines or a knock on the door with a subpeona or warrant shows up. Lawsuits regarding this practice are increasing and the penalties quite substantial in the millions of dollars in fines, and millions in compensation by companies who are victimized by fake negative reviews.

This is the dark side of the SEO industry. You’re always going to have some clown figure they can beat the system and this practice of fake reviews is worldwide in scope. It’s easier to detect in the US, UK, but in other areas of the world it is rampant. That’s until Google catches on and bans the site and the company’s services and products fall off. It’s difficult to make people honest when they’re either making revenue or forced to do so by criminals and mobsters, the only way to stop it is via Google and other search engine’s algorithms and the public’s alertness.

If your site is found to have fake reviews and you’re unaware of it, you will have to do some legal stuff quick. The courts will determine if you’ve been part of the scam or a victim. If found a victim you can probably press charges against the SEO company that did this, and you can definitively file a lawsuit when the company is busted for it.

If you’re stupid enough to engage in fake reviews, then you’ve got what your due coming. Better straighten yourself out and get on the honorable side and do it fast.

Get An Honorable SEO Company

Local SEO Jacksonville is a company you can rely on to do the honorable thing. Their staff of professionals know the difference between right and wrong and won’t ever steer you to the dark side of SEO.