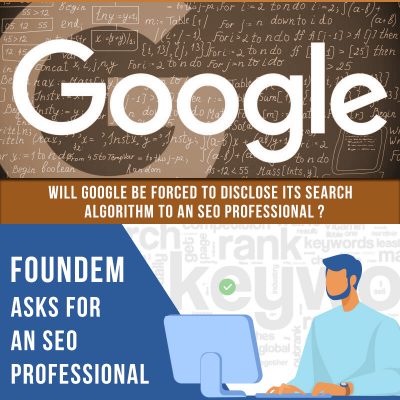 Google is currently involved in a lawsuit which has created a possibility that the flagship company might be forced to reveal its long and well-guarded algorithm secrets. The UK courts have given an ultimatum to Google that they either withdraw their defense evidence or reveal the search algorithm details. If this happens Google will be forced to hand over the search algorithm details to the working SEO consultant.

This whole situation that Google finds itself in stems up from a lawsuit filed by a company called Foundem against Google in 2012. Although the lawsuit was filed in 2012 the actual events leading to the lawsuit started way back in 2006. Foundem has alleged Google that it was a victim of anti-competitive practices employed by Google. Foundem has claimed that Google deliberately ranked the Google products ahead of the Foundem products in the SERPs beginning in 2006. Foundem is now asking for damages due to loss of business as a result of being ranked incorrectly in the Google SERPs.

Let’s see what happened to Foundem. It was a vertical search engine that helped the users find the lowest online prices. The facility was available only to a select group of users before it was made available to all. However, before it was available to everyone Foundem appeared in the search results prominently. The company appeared on the first page of search engine results often while displaying the shopping-related results. After becoming available for everyone within two days Foundem was found buried in the search results of Google. It dropped from the first page to around the 12th page and many times around the 100th page. This appears suspicious because the search ranking of Foundem dropped only in Google and ranked highly for other search engines. This led Foundem to the conclusion that it was a measured action on part of Google to suppress opposition against Google Shopping.

For obvious reasons the mega search engine, Google is not willing to disclose its search algorithm secrets. But Google is also not willing to withdraw evidence that is critical to the organization for winning the lawsuit. These are the two choices available to Google at the moment while fighting the case. Of course, the only other choice available will be to settle the case. This means millions of dollars of settlement in damages not to mention that it means the creation of a perception that Google did something wrong. The best available scenario for Google at the moment is that it withdraws the evidence and yet somehow manages to win the case.

Foundem Asks for an SEO Professional

The Google search algorithms will be too tough for the lawyers to understand so Foundem argues that it wants to bring in an SEO expert for the purpose. It specifically wishes to bring Philipp Kloeckner for interpreting the Google search algorithm. Google, on the other hand, argues that providing information to SEO may compromise the integrity of the whole search engine ranking process. Foundem is not satisfied with the response and suggests that Google withdraws the documents it submitted as evidence so that no one will ever see them but Google says they are critical for proving its defense. Therefore, there is no case without these documents.

The Ultimatum by the Judge

For moving this case along the judge had to step in and he ordered that Google either withdraw the documents or allow them to be seen by the SEO expert Kloeckner. If Google stays firm on not withdrawing the documents the judge in all probability will grant permission to the SEO expert to view them. The court is giving Google a reasonable time to make up its mind. If you are keen on improving your local SEO ranking in the Jacksonville area get in touch with Local SEO Jacksonville rather than taking up the task yourself.